Wandered on out to Bayankhongor for a quick visit to Ekhin Gol Oasis, the southernmost settlement of the aimag. After dropping down from the high plateau around Shinejinst to the Gobi Desert the first oasis we encountered was Zuunmod.

The Wedding Ovoos. Locals who get married alway stop here to built an ovoo and down a bottle or two of vodka.

After traveling for over sixty miles through the barren desert it is a downright shock to come to the luxurious greenery of Ekhiin Gol Oasis.

All kinds of vegetables grow here in amazing profusion, including tomatoes (for which the oasis is famous), cabbage, cucumbers, carrots, onions, potatoes, and all kinds of melons.

One of the seven springs which feed Ekhiin Gol Oasis
My main reason for visiting Ekhiin Gol was to track down information on Dambijantsan, a.k.a. Dambijaltsan, Dambija, Ja Lama, Ja Bagsh, Toushegun Lama, False Lama, Avenger Lama, Two Camel Lama, and Chia (Jia in Pinyin) Lama. Earlier this year I had tried to visit Dambijantsan’s Fortress in the Black Gobi. Now I wanted to meet with an eighty-year old man named Zeskhüü whose wife, now deceased, was the daughter of Dambijantsan’s chief lieutenant. This man had a wealth of information about Dambijantsan which he was not at all hesitant to share. We talked to him for a total of five or six hours. I will have details of his revelations about Dambijantsan later. 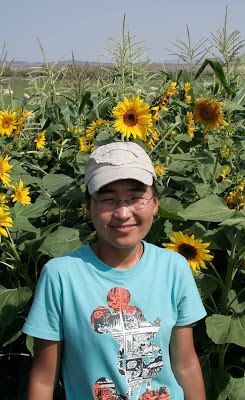 Shandas, who accompanied me on the trip. She is an excellent translator and a very personable young woman. It was a privilege to meet her (click photo for enlargement).